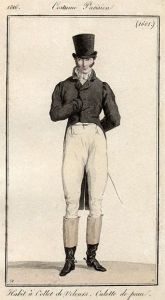 By day he was a gentleman, all good and rich and proper,

He wore the latest fashions – a sartorial show-stopper.

He could handle well a curricle, ride his stallion at full speed,

He attended church on Sundays and all but pissed Noblesse Oblige.

His house was grand, his fortune large, he was, in all, quite classy,

He was well-respected and debonair – and he said his name was Darcy.

No one had ever guessed that this was all a cunning ploy,

A clever plot, a sneaky ruse, a brilliant decoy,

To conceal his true identity – and here’s the real surprise –

He was in fact a Super Hero, parading in disguise!

Yes! By day, he fenced and rode and penned letters to his steward,

But by night he donned his lycra suit and did things that very few ‘ad.

He flew about the rooftops looking for unpleasant scenes,

And whenever he did see one, swept in to catch the wicked fiends.

And saving all of England from the threat of being mugged.

He pulled felons out of bank vaults, and stopped blackguards fighting duels,

He dragged burglars out of parlours and returned the stolen jewels.

T’was no deed o’er which our Hero could not easily prevail,

No threat too great or job too small for this exceedingly Super male.

He stopped a mighty meteor from crashing into earth,

He prevented Lady Catherine’s skirts from igniting in the hearth.

He thwarted a vast conspiracy to overthrow the crown,

He stopped some melted ice cream dripping on his sister’s gown.

Not only was he secretly hell bent on man’s protection,

He was also a pretty darn hot hunk of masculine perfection.

He cut a dashing form in the suit Mrs Reynolds had designed,

(With exceedingly tight tights and long cape billowing behind).

He soared, majestic, through the skies, looking pretty fine,

And every now and then dropped in to stop an evil crime.

Such was his wondrous awesomeness (it is a shame to say),

He had become a tad cock-sure of his power to save the day.

And as the proverb rightly states, “pride comes before a fall,”

There came a night when even his tights, could not mishap forestall.

Shortly before the hour struck nine, just after he’d donned his cravat,

His super hero senses discerned a problem so awful that,

He had no choice but to discard his coat and breeches, shoes and stockings,

And slip into his lycra suit and do something rather shocking.

He flew across the moonlit fields of rural Hertfordshire,

(More certain by the moment the problem must be truly dire),

And flew straight in without a thought to the window from whence had come,

Such shrieks and caterwauling as had battered his super eardrums.

Ready to do battle he took up a fighting stance,

He raised his fists and tensed his arms – and only then did glance,

At what – or who – was responsible for all the hue and cry,

And what he saw was quite enough to bring tears to his eyes.

There stood upon the carpet in all her natural splendour,

Was a naked Mrs Bennet wearing naught but lace suspenders.

(And a hefty dose of nausea as a result of the missing frock).

Before he had recovered himself enough to do his duty,

The door crashed open and through it came the most astounding beauty.

Her hair was dark, her eyes were fierce, her lips were luscious red,

He wanted nothing more right then than to whisk her off to bed.

“Mama,” she cried (her voice was soft, like lovely fluffy clouds),

“Whatever is the matter now? And must you be so loud?”

Before our hero could even blink she’d seen and solved the crisis,

(The problem having been the presence of two teeny little mices).

By the time he recovered his faculties she’d summoned Hill and bade her,

To bring the family pet upstairs to catch the furred invaders.

Next she turned upon the man who stood in her mother’s room,

Clad head to toe in lycra and looking much as though he’d swoon,

“I thank you but we have no need of your Super Hero favours,

“We have a cat to kill the mice so you do not need to save us.”

With that she spun upon her heel and left him standing there,

With the mice and the maid and the mother who was still stark bollock bare.

Mrs Bennet opened her mouth and sucked in a mighty breath,

But ere she could begin to scream our hero turned and left.

Such was his alacrity, his hurry, his haste, his shame,

That he snagged his Super underwear upon the window frame.

And so it was that as he left the scene of this mishap,

For the first time in his super life, he received not even a clap.

No round of applause, no grateful cheers, not a single gasp of awe,

All he heard as he flew away was the rip of his Super drawers.

Hours later he arrived (in a funk) at the Meryton Assembly rooms,

Dressed once more in his gentleman’s garb and lamenting his ruined costume.

His manner, it was true to say, was not fitting for a ball,

For he paid no heed to anyone, he ignored them one and all.

His mind was far too busy, you see, thinking how he might disclose,

To the rather fearsome Mrs Reynolds the fate of his Super small clothes.

The people of Meryton took umbrage, they did not like his pride,

They feared his scowling look of death that made them want to hide.

They despised him for not dancing with a single maid among’em,

They declared him grumpy and sour and mean; an all-out thorough wrong’un.

Little did the gathering of disgruntled townsfolk know,

Alas that was not all the ill to come from the misadventure,

There was one other consequence for our regency avenger,

For, if his funk had not so drastically bedevilled his demeanour,

He might never have slighted the dark-eyed girl before he’d even seen her.