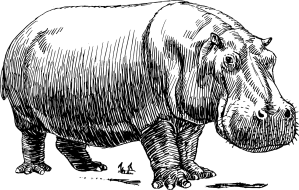 I didn’t expect the next instalment of ‘outwitted by words’ to be my own faux pas, but I’m not one to pass up an opportunity to laugh at myself so here goes.

I was playing a board game at a friend’s house the other day, called ‘Five Second Rule.’ You have to name three things in a given category within five seconds in order to move forward on your turn. Simple, no?

My given category: garden animals. Also simple, no? Think of all the myriad things I could have named! Birds, bats, hedgehogs, foxes, badgers, snails, moles, beetles, slowworms, maybe even the odd deer. Alas, I said none of these – and here’s why.

The question was put to me thus: Name three animals in the garden. “Ah ha!” thought I, “What a delightful example of ambiguous punctuation!” And off my mind went on the most untimely and pretentious of tangents. “Why must I name three lowly garden animals when I could clearly outwit this cockamamie game and name any three animals, from anywhere in the world, whilst standing in the garden!”

I began imagining all the fauna least likely to be found in an average English backyard. An aardvark, a giraffe, a hippo perhaps? Why not an emu, or a lemur or a komodo dragon? Or even a goblin shark, a sea pig or a red lipped bat fish? Feeling more than a little smug, I eyed the door; was it locked? Could I reach it, go through it and still have time spare to give my splendiferous answers? Clearly not.

At this point, I experienced a moment of self-awareness that would have given Martin Heidegger ontological orgasms: I was a twit. All my pretensions to literary dexterity were shown to be worthless. The time had run out. My friends’ laughter at my inability to name so much as a worm turned to out-and-out hilarity when I attempted to explain my delay. They agreed; I was a twit. A twit who had been thoroughly outwitted by words.