When I republished Mistaken under my own steam, I edited out some scenes to make way for a new epilogue. Here’s one, from later in the story, that shows Elizabeth’s stalwart attempt to befriend Anne de Bourgh. Enjoy!

A happy sight greeted them upon reaching the lawn. Mr Montgomery and a small boy, whom Elizabeth presumed must be his son, were playing a game of cat and mouse. Too busy watching his father over his shoulder to pay heed to where he ran, the boy promptly careened headlong into Darcy’s legs, which had rather the same effect as a blancmange being hurled at a boulder—one moved not at all, and the other crumpled in a messy heap on the ground. Elizabeth crouched to help the boy to his feet, brushing his breeches clean.

“Jonathan, do be careful!” Mr Montgomery called as he made his way towards them.

“It is very nice to meet you, Master Jonathan,” Elizabeth said. “I am Mrs Darcy. And this is my husband, Mr Darcy.”

“You have introduced yourselves, I see,” Mr Montgomery puffed, arriving at the scene rather short of breath. To his son he said, “Mr Darcy is Miss de Bourgh’s cousin.”

Much to Elizabeth’s delight, the boy gave them a dear little bow and then craned his neck to look up at Darcy.

“You are too big to be a mouse,” he declared. “I shall be the mouse. You be the cat.” Then he turned and toddled away across the lawn, leaving the three adults regarding each other—one apologetically, one sceptically, and the other vastly diverted.

Elizabeth raised an expectant eyebrow at her husband. With a sigh and a perfectly solemn countenance, he removed his hat and greatcoat and handed them to her, then exploded into a run across the lawn. Jonathan squealed and tripped over his own feet attempting to escape. Mr Montgomery soon joined them, and Elizabeth watched with melting heart as two of the most serious and dignified men of her acquaintance darted about the lawn, drawing shrieks of happy laughter from the little boy. She could not help but suppose Darcy’s anticipation of fatherhood contributed to his rare eschewal of decorum, and her stomach did another of its little pirouettes as she fell a little further in love with him.

Only as she looked about for a seat did she notice the solitary figure occupying a bench on the far side of the lawn. She presented a lonely picture, and Elizabeth set out at once to speak to her. “Good morning, Miss de Bourgh. May I join you?”

“Mrs Darcy,” she replied, nodding at the space next to her by way of permission but not moving to make it any larger.

Not overly surprised and certainly not deterred, Elizabeth lowered herself onto the bench, balancing Darcy’s hat and coat on her lap. Having imposed this far, she felt obliged to begin the conversation, but not knowing the least bit about her, was unsure which subjects were safe. She settled on enquiring after her health.

“I am as well as I ever am. Which is not very,” answered Miss de Bourgh.

“I beg your pardon, I was not aware you were unwell.”

“I am not unwell. I am simply not well.”

“I see.” Such a contrary creature! “You must be greatly anticipating your wedding tomorrow.”

“I hope for your sake that you are. Mr Montgomery is a very kind, unassuming gentleman. I hope you will be very happy together. From what I hear, it sounds as though he has grown very fond of you.”

This remark brought Miss de Bourgh’s head whipping around and the first splash of colour to her cheeks Elizabeth had ever observed. “He has?”

“Why, yes. Darcy tells me he speaks very highly of you indeed. I understand he values your calmness of temper in particular.” This evidently flustered her, leading Elizabeth to wonder whether she had ever received a compliment on aught, other than the things her mother believed she might have accomplished had her health allowed it. “Master Jonathan seems a lovely, lively little boy.”

“He is certainly the latter.”

Elizabeth smiled. “Most three-year-olds are, I think.”

“Are you much in the company of young children?”

“I have been, at various times. I have three younger sisters and four very young cousins.”

Miss de Bourgh picked at a fleck of dust on her pelisse then looked into the distance with a sniff. “I never thought I would have children. I know not what one is expected to do with them.”

A small laugh escaped Elizabeth’s lips before she could prevent it. Such a curious mix of uncertainty and arrogance she had never seen. “Does Master Jonathan have a nanny or a governess?”

“Then all there is for you to do is love him.”

Her companion’s only response was to look moderately terrified.

“Miss de Bourgh,” Elizabeth said cautiously, “our husbands are good friends. It is probable you and I shall be thrown together quite often as a result. I cannot but think it would be tedious to be always in each other’s company and never at liberty to enjoy it. Do you not agree?”

“Come to the point, Mrs. Darcy. I do not care for clever tongues.”

There really was no further proof required that she would never have truly appreciated Darcy had she married him. “Very well. I should like it if you and I could be friends.”

Elizabeth had rather expected her to be offended by this proposal, and she was surprised when spots of colour once more pinked her cheeks, for she looked more abashed. It occurred to her that perhaps Miss de Bourgh did not have many acquaintances she could call ‘friend.’ “Mayhap, in time,” she pressed gently, “we might learn to be mothers together.” She received no answer but counted it as a great victory that neither did she receive a rebuff. “Shall we begin now?” she enquired, gesturing with a nod towards Jonathan.

Miss de Bourgh gave the smallest of nods. As they walked onto the lawn, a slight movement behind her caught Elizabeth’s eye. She looked up at the house and observed Lady Catherine peering from an upstairs window. She smiled up at her and inclined her head. Her ladyship’s eyes narrowed furiously, the curtain dropped back down, and she disappeared from view. Elizabeth sighed, then just as quickly smiled and turned to forge ahead with Miss de Bourgh, counselling herself that the walls of Badajoz were not brought down in a day.

Mistaken is a witty and romantic novel that delights in the folly of human nature. 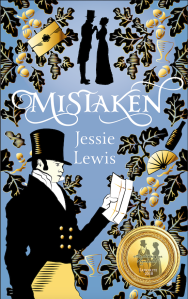 First Edition (no longer in print)